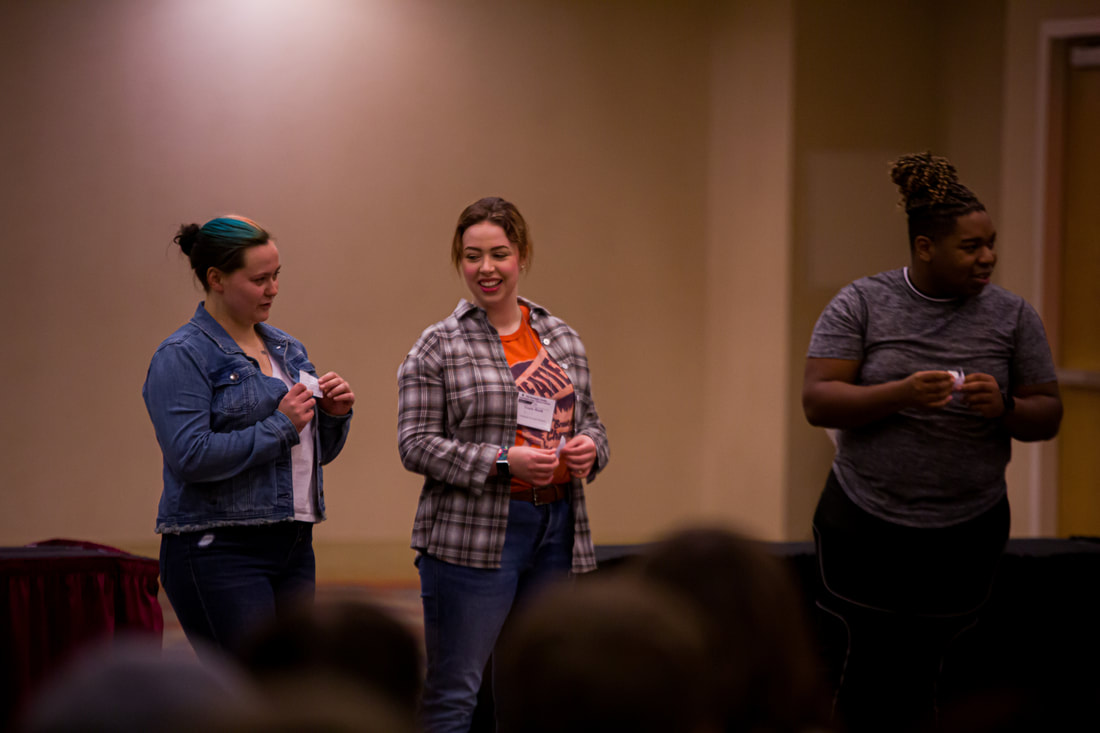 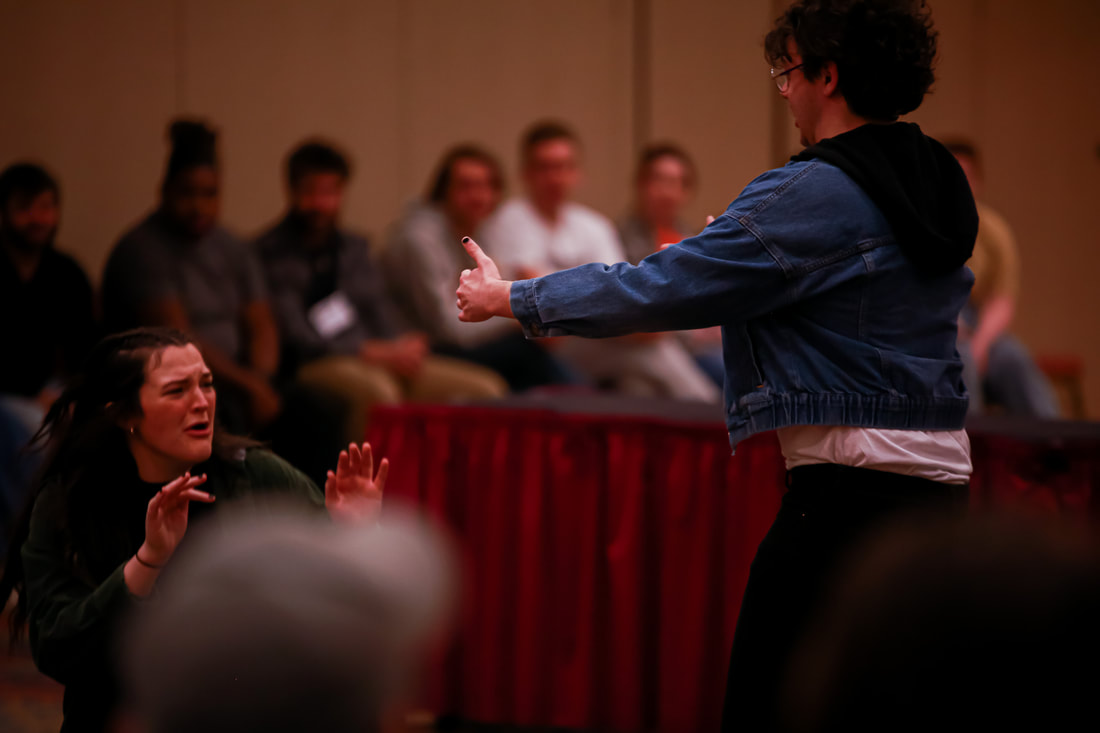 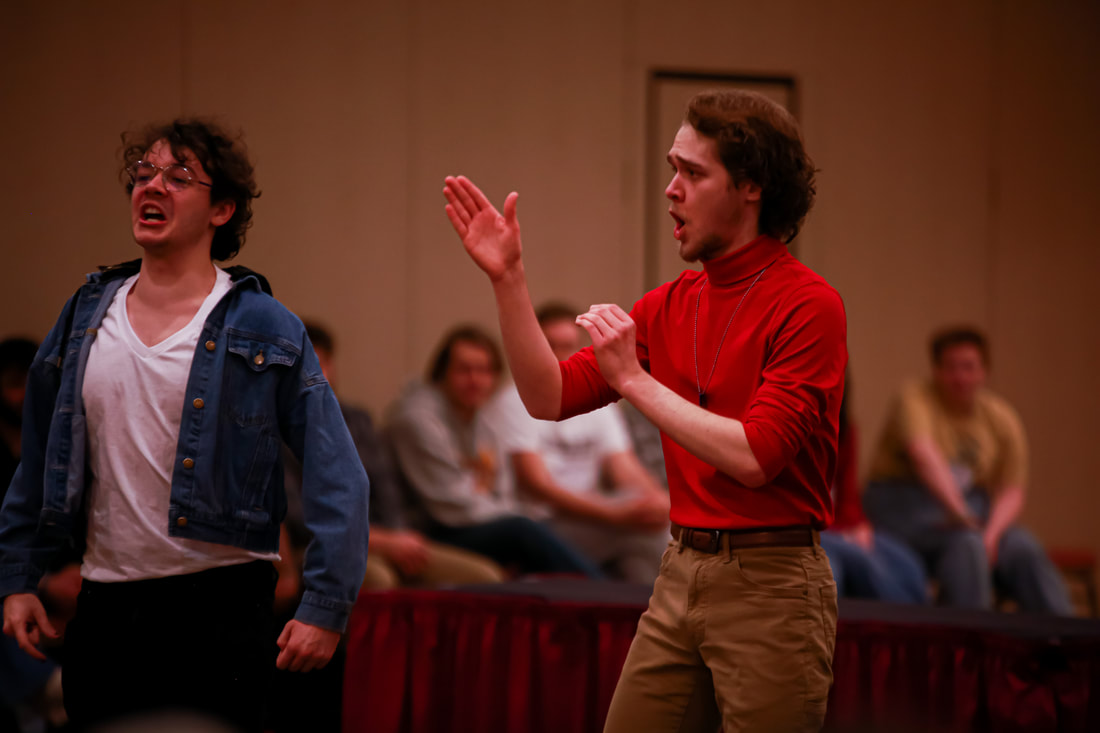 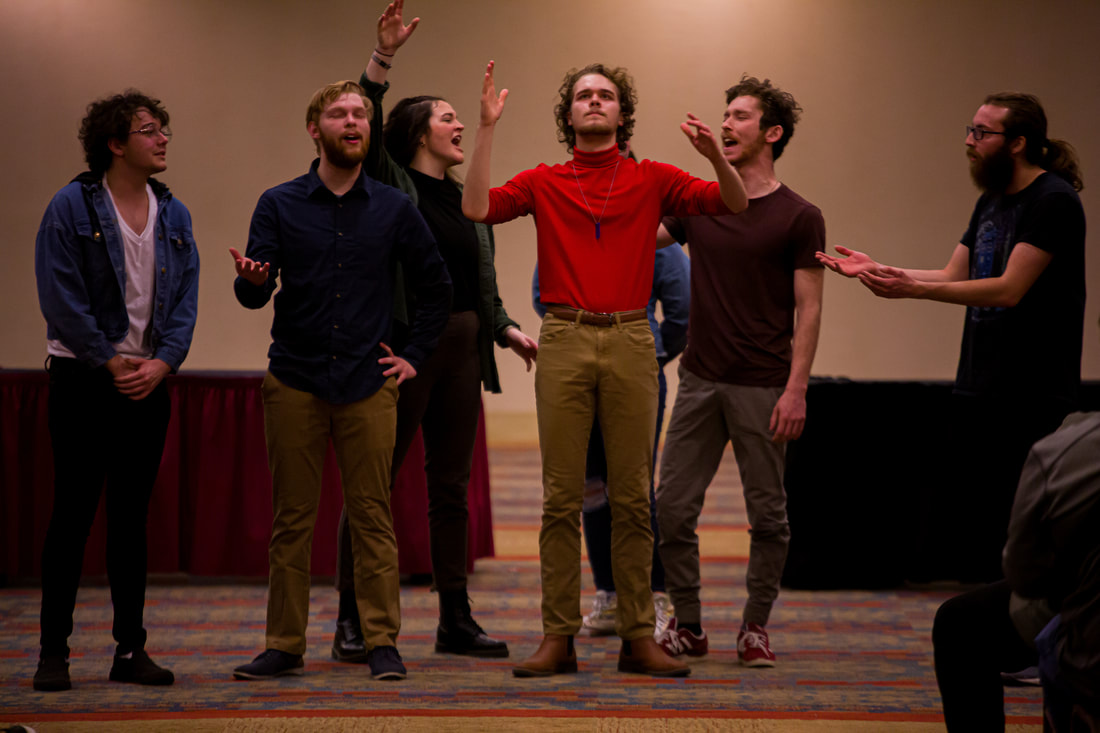 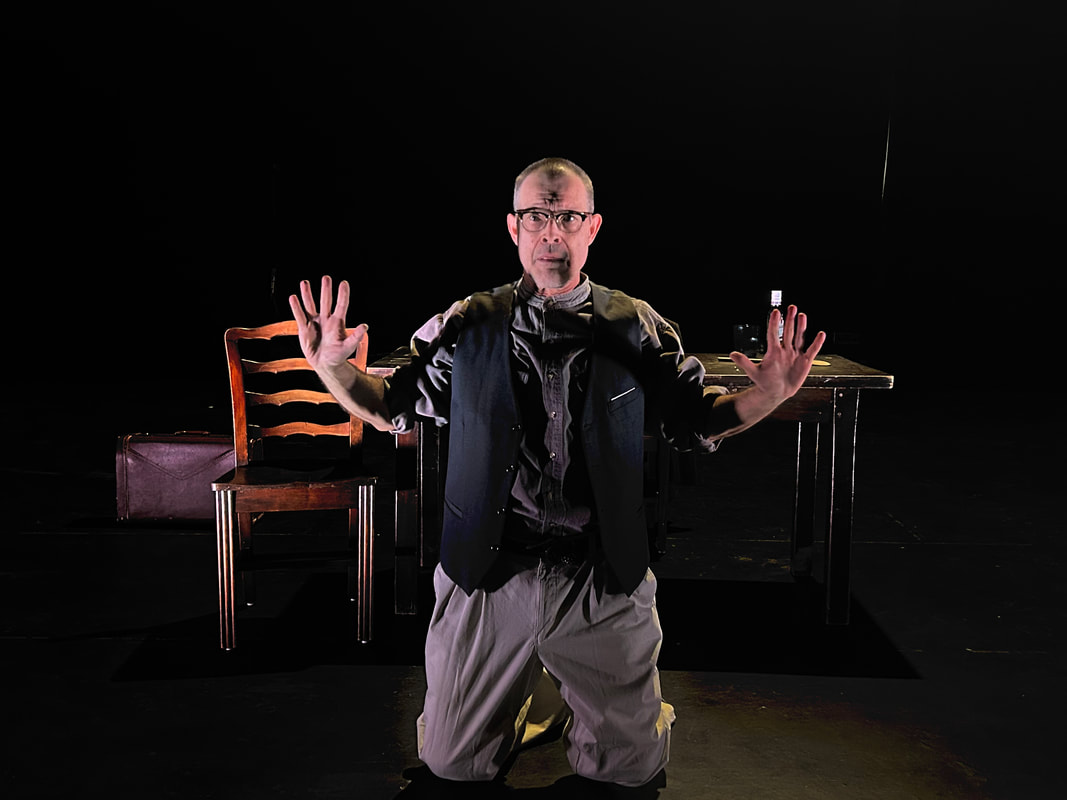 Photo Courtesy of LUCAS GRANHOLM
The Poet (Roy Schultz) raises his hands as he portrays the death of Patroclus.

"Every time I sing this song, I hope it's the last time," says Schultz, in character as a timeless Poet retelling the Trojan War.

Set simply by a table and two chairs placed asymmetrically on a raised stage, the symmetric lighting and wide cast shadows accentuate the vocal performance with stunning visuals provided by Lucas Granholm.

Physically, Schultz reaches each character in exquisite detail through his mastery over his costume and position on stage. Through the Poet's actions, the red spirits of a funeral dawn flit through fingers, the broken will of Andromache falls by the drape of a scarf, and the splendor of Achilles leaps from the shadows.

The minutiae of the props and costume pieces provided to the Poet provide keys into Homer's world: a wooden spoon holds the full arrogance of Agememnon as his scepter, a broom handle becomes a metaphor for life as walking stick and spear, and a fedora at once represents the love of a father and the inevitability of war.

The cycle of revenge at the core of the Illiad springs to life from the lurid gore of Patroclus's attack on Troy to the visceral depth of Hector's encounter with Achilles. But beyond the raging moments of battle, the story breathes with life as a soundscape of crashing waves and lamenting Greek instruments fill the quiet and vulnerable spaces left all too often unsung.

Sound effects join the Poet's voice only when needed most, driving the story on at crucial moments of gravity and crashing into the air at brutal moments of human weakness.

Of the nearly 20 characters Schultz's Poet portrays, he seems most at home in the mourning King Priam as he parlays for the body of Prince Hector. Schultz's distinctive characterizations perfectly contrast the devastated king with the emotionally drained Achilles, filling these legends with a depth that they sometimes lose in the written medium.

Schultz's Poet draws on all of the Greek theories of oratory to bring this script to life as a convincing oral relic, preserved through the endless passage of time. In a final desperate bid to drive his point home, the Poet recounts centuries of wars from memory and reaches the brink of exhaustion before hissing out "the Russian Invasion of Ukraine."

Little doubt is left to the anti-war message to be taken from "An Illiad." Yet as the Poet rasps through some of the worst human conflicts of history, the same unheeded lessons of countless wars file into view.
But though "An Illiad" can never provide a final plea for peace, it remains unflinching in its hope to continue to try.

Life is a Dream Review 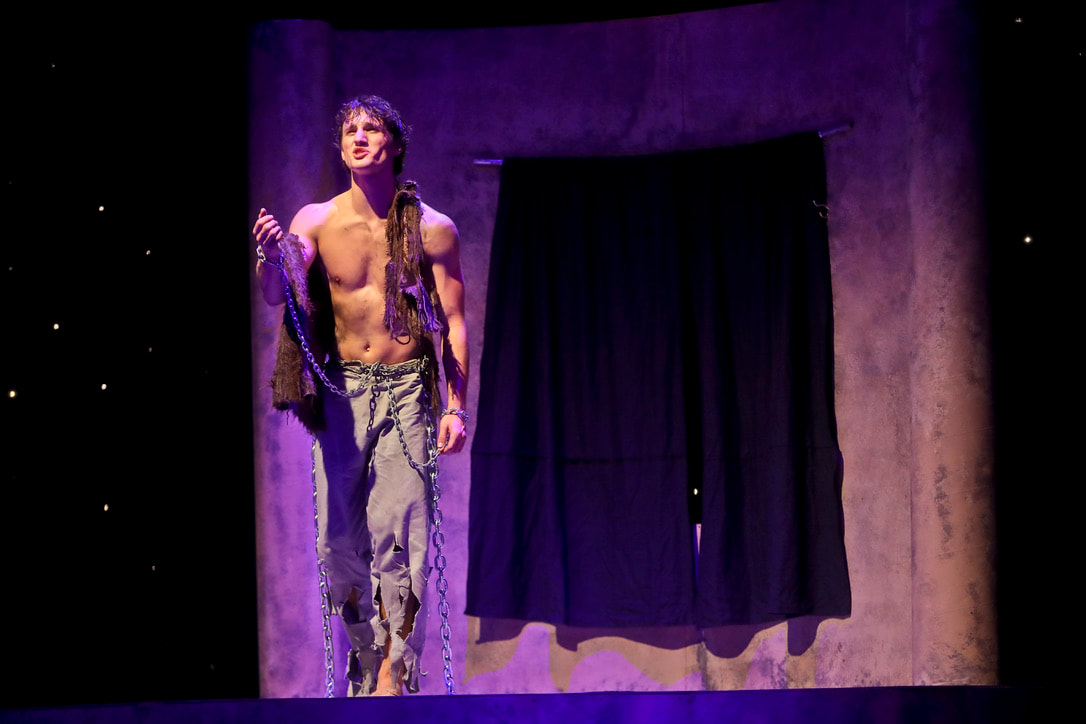 Photo Courtesy of ROBERT HUBBARD
Segismundo (Jack MacGregor) stands bound in his mountainside prison after waking from a dream.

"Life is a Dream" weaves transcendent humor to connect past to present
By MITCHELL LIERMAN
mitchelllierman@gmail.com

With it's oldest translations now firmly in the public domain, "Life is a Dream" provides a sandbox for updating this psychological succession classic for today's brutal attention economy.

Northwestern College's production under the direction of Robert Hubbard] capitalizes on this freedom to infuse a layer of humorous anachronisms –  which astute audience members might use to predict the show's white-out denouement.

From the rubber chicken used to tase Segismundo to Astolfo's laser-pointed genealogy thrown across the set's protection spaces to the subtle chorus of Bungee Studio's Halo theme underscoring Clarion's microcosmically ironic death, the production  winks to today's memetic culture without skipping a beat.

Projections weave the connective tissue between past and present as well as fact and fiction throughout Northwestern College's rendition, carrying the audience ever deeper into the onslaught of well-handled multipage monologues found within Calderón text.

By intermission, the beguiled prince stands adrift in a sea of animations that pair flickering iconography with swirling constellational projections. Marrying the potential of contemporary multimedia to the traditional world of this classic brings the experience to the brink of breaking free from itself: the doubled imaginations of the production's creative team in our world and Segismundo in his offer an atmosphere which invites the audience to ponder the truths found in our virtual experiences even as Segismundo struggles to himself.

In this moment, Northwestern College's "Life is a Dream" pierces the veil.

Across time and space, Segismundo's anguish on reawakening in his cell brings to mind a moment now familiar to many of us: as we reentered our "normal" world after the last few years, we found it not so different from the adjustment we thought we were leaving behind.

With so much of life having merged with digitized virtual experiences during the pandemic, our attention spans, perceptions and even our very definitions of reality have radically shifted. Even now, it sometimes seems we may wake at any moment to find the teleconferences, lockdowns, and social deprivations of the past three years fading like a bad dream.

Like the monarch in "Life is a Dream," we must accept the reality we have tried to avoid. The losses we have experienced since the pandemic continue to weigh heavy on us as we inch closer toward the quarter mark of the 21st century.

Despite the digital avatars, gleaming screens, and electric lights separating us from Calderón, the themes of misinterpreted fate and virtual experience present in "Life is a Dream" find themselves perfectly at home in our online era of blink-and-you'll-miss-it change.

The stage is moving with us. Now more than ever, reflecting on the past provides us with the inspiration to innovate for a better future. As Northwestern College has shown us, classic and public domain works like "Life is a Dream" can put us well on that path.